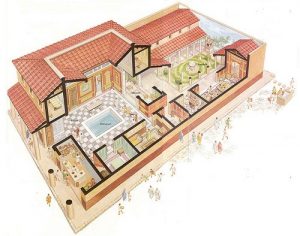 I think the Roman houses were very well built, because they were the first to use some cement in their houses. I wonder if they would have known that we would be digging up some of their houses still today!

I would like to live in a Roman house because they had a swimming pool in the middle of their houses. The swimming pool was called an impluvium. The Romans liked to see the garden from their dining room. It would make me feel nice and relaxed, ready for bed! I would also like to have a mosaic on my floor, like them.

I wouldn`t like to live in a Roman house because they were all open and I would feel all cold, especially when winter came!

Would you like to have lived in a Roman house? 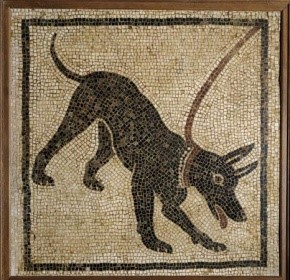 The Romans were here long then we’ve ever been.The Romans fought other country’s to make a bigger empire to take over more country’s or to take other the entire world but that never happened.

Then the Romans atempted to take over britian , they tyres twice but failed both. The next emporer was called emporer claudius he got so mad he had 45000 Romans solders to take over Britain.

In AD 69 the Romans arrived in the north  of England.  The Roman Governor, Agricola built a fort from turf and timber around AD 79.  It was named Mamucium.  Known today as Manchester.

The name Mamucium is Latin for ” breast shaped hill” after the shape of the rocky hill it was built on.  You can find a statue of the Roman Governor Agricola in the centre of Manchester outside the Town Hall. 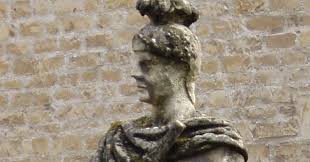 ” Grandma when do you think it’s going to stop?” cried Patcy. Patcy could hear lots of different sounds outside.  She heard a loud crash , Booms and a bash.

Her grandma replied ” I don’t know my dear I hope no one’s hurt.”

” Me to.” replied Patcy. ” Why is they such thing as a war”. Asked Patcy. Patcy lived in Scotland so she had an accent.

” Because there’s nasty people.” Sighed grandmar. Before dad left he gave her a charm which had a dragon and mermaid on it. Every minute more and more bombs went off. So nana decided to put patcy as an evacuee.

“I know ,I know there are other people out there who will look after us.”Jess moaned .  With bravery Jess opened the door beside mum . Bang, Boom!

“What’s that ?” Said mum stepping out . “Fine ,but stay close to me whilst I see what’s going on .” Called mum. Jess clung to mum as they stepped out on to streets of Manchester .

“Wait Ella,it isn’t safe out there!”cried Mum.  “You can’t run out there like that it’s to danarous out there.”scolded Ella. “I know,I know but there are thousands of soldiers out there,there’s even your friend Joe out there.” explained Ella.Mum sighed, so Mum opened the window and the enimeis up ubove threw bombs down BOOM,BANG they went. Mum cried “GET DOWN ELLA NOW!” “What’s happining ?”Ella said confuesdly . ” We’re being bombed.”Mum shouted “But why us .”she said.Mum sat under the window blanking Ella.

Mum said sadly “Every one get’s bombed in France .” “But why us?” Whined Ella.Mum said “Bad people do it to other people that are good, because they are jealous about good people.”

I am enjoying learning about The Lion and the Unicorn.

So far I have learnt that Lenny has been evacuated and these girls are bullying him.

My favourite part in the book is when he tries to run away and a unicorn comes out of the woods and then he falls asleep curled in the unicorns wings.

I can’t wait to finish the story.

According to the Roman legend, Romulus was the founder of Rome. Romulus and his twin brother Remus were the sons of the God Mars. When they were very young they were abandoned by the banks of the River Tiber and left to fend for themselves. Luckily for them they were found by a she-wolf who took pity on them fed them with her milk.  The boys were later found by a shepherd who raised them. The boys grew up to be very strong and clever and they decided to build a town on the spot where the Shepherd had found them. They named their town Rome.

Would I go to school ?

Poor Roman children did not go to school. Their parents could not afford to send them. Instead , they were expected to help there parents with their work. Some boys learnt a craft , such as wood working or making mosaics. Girls learnt how to run a household.

Children in Roman Britain did not have books to write in. A pupil used a metal pointer , called a stylus , to write on a small wax tablet.